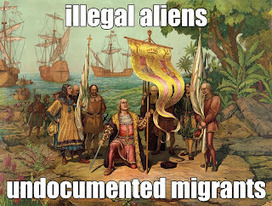 disclaimer: People are not illegal – actions are illegal

Born in Italy.
Worked for Spain.

While looking for a shorter route to Asia, Columbus sailed west from Europe, instead of east and landed on the island of Hispaniola (Dominican Republic and Haiti). This landing started the invasions, murders, rapes, disease outbreaks, theft and colonization of the Americas.

Columbus was not the first to discover the Americas. Indigenous Amerindians discovered it first when they migrated from Asia.

Next, Bjarni Herjólfsson, a Norse (Norwegian) explorer was the first known European to discover the mainland of the Americas, which he sighted in 985 or 986.

Leif Ericson, another Norwegian, with the knowledge from Herjólfsson, lead an expedition that landing in North America, about 500 years before Columbus.

Is renewable energy now cheaper for you?

Mass Wedding and A Day of National Protest September 21, 2017

Cropping in the Rainfed Rice Farm